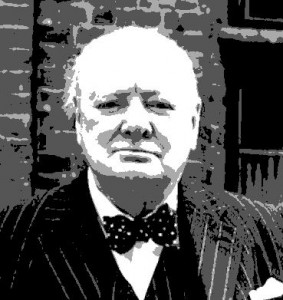 Over the past few weeks I’ve been rereading Winston Churchill’s A History of the English-Speaking Peoples.

Churchill was a lifelong history fan. He was also an excellent writer. He began writing the four-volume history in 1937. But it wasn’t until 1956 that the first two volumes were published. The third volume followed in 1957 and the fourth volume, subtitled The Great Democracies, in 1958.

Churchill’s approach to history has often been criticised for its lack of attention to social and economic aspects. A History of the English-Speaking Peoples focuses on war and politics, soldiers and statesmen. One of Churchill’s political opponents, Clement Attlee, even suggested that it should have been called Things in History That Interest Me. By me, Atlee of course meant Churchill.

But there is rather less argument about the quality of Churchill’s writing. More than 50 years on, it still has a freshness that makes many more recent works seem ponderous, even turgid. Take this paragraph from the section on the Crimea War:

[The Light Brigade] captured the guns but only a third of the brigade answered the first muster after the charge. Lord Cardigan calmly returned to the yacht on which he lived, had a bath, dined, drank a bottle of champagne, and went to bed. His brigade had performed an inspiring feat of gallantry. But it was due, like much else in this war, to the blunders of commanders. Lord Raglan’s orders had been badly expressed and were misunderstood by his subordinates. The Light Brigade had charged the wrong guns.

It’s filled with information. It offers an interesting insight into Cardigan (and certainly not one I recall from my school days). It leads nicely to the ‘punch line’: The Light Brigade had charged the wrong guns. And there’s not a single difficult or pompous word to trip up the reader.

The chairman of a research company asked recently if there was a simple way to get his people to write in a more accessible style. I suggested that he get them to read a bit of Churchill.