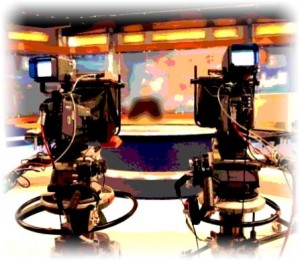 I recently watched the whole of the primetime news bulletin on one of the main TV channels.  I didn’t have a stopwatch handy, but my best estimate is that at least half of the ‘news’ and about a third of the ‘sports news’ was actually just gossip.

Some less critical viewers might have called it ‘infotainment’.  But, no, it was clearly gossip – and pretty trivial gossip at that.

According to some sociologists, gossip plays an important role in the formation and maintenance of communities.  The shared pool of often-inconsequential information (and misinformation) apparently helps us to bond together.

I can see that this may have been so when the community in question was a nomadic hunting group or a small village.

‘Have you heard?  Ugg stubbed his toe during the buffalo hunt last night.’

And I can see how it might have worked when the gossip was shared by a sub-group within a larger tribe or perhaps a market town.  I can even see that it might work (although whether for good or bad is another matter) in a large workplace.

But I really struggle to understand how today’s seemingly endless stream of gossip – especially the largely irrelevant minutiae of the private lives of so-call celebrities – benefits anyone other than the owners of the media that facilitate its distribution.

How on earth does the shared knowledge that some manufactured ‘star’ (of the human variety) may – or may not – have enjoyed one too many sherbets at a party to launch another manufactured star’s latest musical-ish offering benefit millions of people spread across 20 or 30 different countries?

Is it going to turn them into one tight-knit cooperative community?

No, I don’t think so either.

Oh, and by the way, did you hear what happened last weekend at the secret party that the Duchess of Disaster threw for some of her super-rich-lister friends?  Well ….