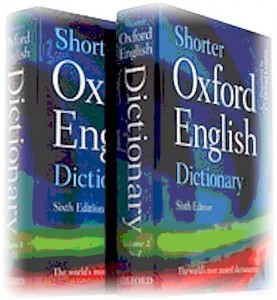 ‘Well, actually it is.  The writer wrote it – and, as far as we can tell, a good portion of her readers understood what she meant in using it.  So, for all practical purposes, it’s a word.’

‘I bet you anything that you can’t find it in a dictionary.’

‘You may well be right – for the moment – but that doesn’t mean that it’s not a real word.  Dictionaries don’t lead; they follow.  Dictionaries record the common spelling and meaning – or meanings – of words that people are already using.

‘New words are being coined every day.  Technically they are known as neologisms.  Many of them wither away within a matter of months.  But others stick around long enough to find their way into the next edition of The Oxford or Mirriam-Webster or one of the other authorities to whom we turn when we want to know the meaning or accepted spelling of a word with which we are unfamiliar.’

‘That’s just silly.  If that was the case, I could just make up a completely new word.’

‘And if I could persuade a few people to use it, it could end up in a proper dictionary – even though I had just made it up.’

‘Not only could it, but it probably would.’

And so ended the conversation.

This entry was posted in Better communication, Word Origins. Bookmark the permalink.