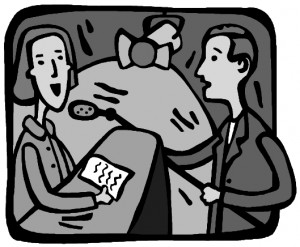 More than 200 years ago, Samuel Johnson cautioned his fellow journalists ‘Do not accustom yourself to use big words for small matters’. Oh that some of today’s scribblers would heed your advice, Sam.

Over the past few days, I have heard one TV news reporter describing an event that was not even particularly unusual as very unique. I heard another reporter saying utilise three times when she really meant use. And I heard the anchor of the same news programme referring to an event that a very small handful of people had, apparently, been eagerly awaiting as one of the most anticipated events of the year.

As far as the boys and girls at KiwiStreet are concerned, something is either unique or it is not. There are no degrees of uniqueness.

To utilise means to put to good use something which might otherwise be wasted. It is not simply a posh synonym for to use.

And while the anchor was probably only reading something that someone else had written, he should have known that, strictly speaking, anticipate means to be aware of something in advance and to take steps to deal with it.

English is a living language. Over time, new words are coined, old words fall by the wayside, and, yes, meanings change. Over recent years, boot has acquired an additional meaning; gendering, greenage, and jet wash have found their way into the Oxford English Dictionary; and matronise has pretty much retreated into obscurity. And there is good reason for each of these changes.

What is disappointing about the TV newscasters’ misuse of unique, utilise and anticipate (and several other words too) is that there was no good reason to misuse them. Like Willy Nilly, the postman in Dylan Thomas’s Under Milk Wood, the newscasters simply found themselves with ‘very small news’. And in trying to make the very small news sound more important than it really was, they not only misled their audience, they sullied some perfectly useful words.

Against Dr Johnson’s advice, they attempted to use ‘big words for small matters’. And the result was far from pretty. – Jack Scrivano