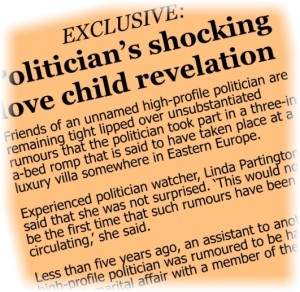 My first paid writing job was with an advertising agency.

I applied for an art job, but there weren’t any.  ‘We do need a junior writer though,’ the MD said.  ‘Why don’t you do that until there’s an opening in the art department?’

I had no experience of writing advertising copy.  But the MD didn’t seem to mind.  ‘I think you can write,’ he said.  ‘And we have a training programme.  We call it “do it, review it, and do it again”.’

The programme seemed to work.  Within three weeks, I was earning my keep.

After my first week in the creative department, the senior writer took me out to lunch.  (Ah, yes.  Those wonderful Friday lunches.)

It was good advice.  It’s just a pity that David is no longer around to give the same advice to some of the people currently responsible for ‘the news’.

While I find most opinion pieces reasonably well thought out and well written (even when the opinion is not one that I share), the same cannot be said for many news stories.

Too many stories begin with a grossly overloaded paragraph vaguely supporting an overly sensational headline.

Typically, the story then heads off in a different direction altogether, leaving the poor reader to wonder if he or she somehow misread the first paragraph.

This is often followed by a not-very-illuminating quote from an ‘expert’ – although the expert’s credentials are seldom established.

(I’m looking forward to the story that says: XYZ’s chief economist, Delia Jones, predicts property prices will fall by as much as 30 percent in the second quarter.  Mind you, the last time Ms Jones got it right was way back in 1996.)

Finally, after squeezing in several tired clichés, the story drifts to a wishy-washy conclusion that often contradicts the headline.

Yes, I know that in the age of the 24-hour news machine, thinking time can seem a bit limited.  But that’s not really an acceptable excuse.

If more journalists would think more carefully about what they want to say; and if, before pressing send, they could make sure that they’ve actually said what they wanted to say; I could stop being quite so grumpy.

And if they would try to say what they mean as simply as possible – resisting the temptation to cram five facts and three clichés into a single sentence – I might even start to appreciate their skills.