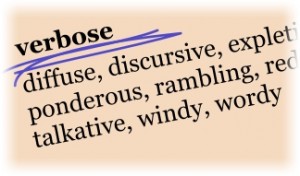 Some of life’s more useful writing lessons are surprisingly simple.

Many years ago, one of my classmates discovered the joys of the thesaurus.  Overnight his essays became models of the sequipedalianist’s art.  He didn’t just replace commonplace words with less-common synonyms.  He replaced them with the longest less-common synonyms he could find. And he flanked each polysyllabic noun or verb with an honour guard of equally long and obscure adjectives and adverbs.

Unfortunately, the reaction of our teacher was not the one that Smithy had hoped to elicit.

‘Too many words.  Too many syllables.  Not enough communication.’

Smithy was deeply disappointed.  ‘I thought you’d be impressed by my vocabulary, sir.’

Sir thought for a moment or two.

‘Impressed?’ he said.  ‘I’m afraid not, Mr Smith.  First I want to be informed.  And, if possible, I would like to be entertained.

‘If you can do those two things, then, yes, I will be impressed.  But right now, your new-found verbosity is just making my head ache.’