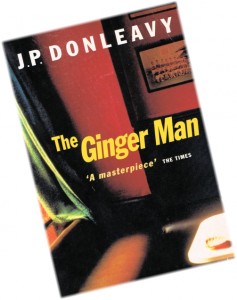 I believe they are known as ‘where were you when’ moments.

But I can remember – with surprising detail – buying some of the books that have turned out to be my perennial favourites.

For example, I can vividly remember buying my first book by J P Donleavy.  It was …

Sunday afternoon, five o’clock.  A flash of lightening, a rumble of thunder hard on its heels.  The first gobstopper drops of the next shower bouncing off already overflowing puddles.

Just duck into this handy corner shop for some shelter.  The tinkling bell waking the proprietor.  Good day to you, sir.  Not that it’s a good day, that’s for sure.  Feigning interest in the merchandise to avoid the rain.  No weather for a white man, is it?   Just a turn of phrase of course.  No offence intended.  And hopefully none taken.  Don’t suppose it rains like this in India.

Apparently not a talker this one.  Watching like a hawk from behind his counter.  Hands out of sight.  Probably with a softball bat at the ready.  Just in case.

The rain beginning to ease.  Move quickly now and I should make it home before the next downpour.  But first I need to show a bit of goodwill.  Make a small purchase.  At times like this it’s a pity that I don’t smoke.  Twenty B&H and a box of your finest matches.  But no point in that.  A book perhaps?  Always find room for another book.  The Ginger Man by J P Donleavy.  ‘Comic, dirty and delightful.’  V S Naipaul.  An opinion to be valued I think, sir.  Although I could be mistaken.  That bell again, this time tinkling my departure.

And even in the rain,

The world’s a better place

With a new book