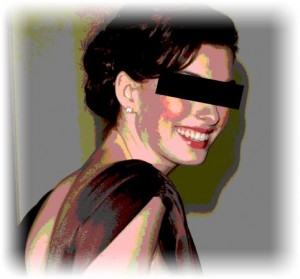 By some stroke of fortune, a group of us – some not known for their time keeping – managed to arrive at the restaurant at pretty much the same time.

‘Ah, yes.  Table for ten,’ the maître d’ said and, after gathering up a small stack of menus, led us to our table.

Purely by chance, I was leading the pack.  And, as we made our way across the restaurant, the maître d’ nodded – very discreetly – in the direction of a table in one corner of the room and whispered: ‘Amanda Nash’.

I’m afraid I had absolutely no idea who Amanda Nash was.  But she was clearly someone important.  Or famous.  Or possibly both.

As we perused the menus, I mentioned – again, very discreetly – to the woman on my left that Amanda Nash was at the corner table.

I told her that I had no idea, but I assumed that she must be someone important or famous or possibly both.

A series of enquiries went around the table and the enquiry chain was almost back to me when one of my fellow diners said: ‘Isn’t she the presenter of one of those house hunting programmes on TV?’  But, as someone else pointed out, that was Amanda Lamb.

And so it seemed that none of us had any idea who Amanda Nash was.  And this led to a general discussion about all of the other ‘celebrities’ of whom we had vaguely heard or read about and yet knew nothing about the reason for their celebrity status.  ‘Just celebrated for being a celebrity, I suppose,’ the woman on my right said resignedly.

Going on for 100 years ago, G K Chesterton suggested that ‘journalism largely consists of saying “Lord Jones is Dead” to people who never knew that Lord Jones was alive’.  We might expect things to have changed in the course of 80 or 90 years.  But have they?  It seems to me that a good deal of modern journalism consists of telling us – in all the gory detail that can be dug up (or made up?) – all about the goings on of people of whom most of us have never heard, people who are, in my dining companion’s words, celebrated for being a celebrity.