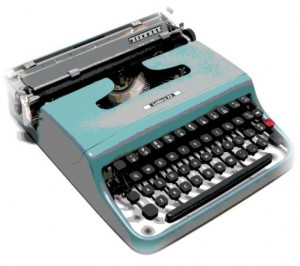 When I first started writing professionally, I wrote with a ballpoint pen on an unlined octavo-sized newsprint pad.  My scribbled pages were then sent to Janice, who processed them on her Imperial typewriter before sending them on to the copy chief.

A year or so later, my boss turned up at my desk one day and asked if I could type.

‘Oh well, I’m sure you’ll figure it out,’ he said.  And he plonked a seriously-second-hand Olivetti Lettera 22 portable typewriter on the desk in front of me.  That afternoon, I typed my own copy for the very first time.

A few years on, and the over-worked Olivetti 22 was replaced with a brand new Olivetti 32 – although often my copy was still retyped by one of the secretaries – usually on an IBM Selectric machine – before heading to its final destination.

And then everything changed.  As a result of a series of complicated (and unlikely) events, I acquired a ‘portable’ PC.  It operated off two 5½ inch disks (one for the application, one for the data), and it weighed about the same as a small car.  But it did enable me to render words in both bold and italic faces.  And it did offer a selection of about ten different fonts.

But not everyone began life with the limited choices of a Lettera 32.  Today, there are many many writers who have always had the choice of 50 or 100 or even 1,000 fonts.  And, unfortunately, more than a few of these writers seem to think that using a dozen or so different fonts in the same document will make their writing more interesting.  It won’t.  And it doesn’t.  It just makes it harder for the reader to read.

Clever art directors and skilled typographers can sometimes get away with mixing several fonts.  Writers seldom can.  For clarity and ease of communication, it is almost always best to restrict and restrain.

Yes, it is now easy to render every paragraph – even every sentence – in a different font.  But, just because you can, it doesn’t mean you should.