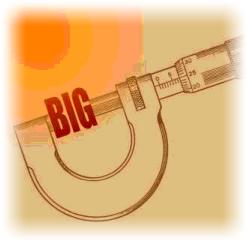 To me, fat has always looked and sounded like a fat word while thin has always seemed appropriately thin.

But big is not a big word.  In fact, it’s just the opposite: it’s a very small word.  And monosyllabic is definitely not monosyllabic.  It’s polysyllabic.

Some words seem to fit their meanings better than others.  Take, for example, pugnacious.  Pugnacious sounds … well, pugnacious.  If you saw a pugnacious coming down the street, I think you’d try to stay out of its way.  Pugnacious just sounds ‘quarrelsome’ and ‘belligerent’.

Rambunctious is another word that sounds as if it means what it says – ‘exuberant’ or ‘unruly’.  But does pulchritudinous sound pulchritudinous?  Pulchritudinous can sometimes be a very useful word, but does it sound ‘beautiful’?  Hmm … probably not.

Earlier today, I heard a chap on the radio speaking – appreciatively – of having received ‘a fulsome apology’.  I can only assume that he was unaware of the fact that, strictly speaking, fulsome has quite a negative connotation.  The dictionary definition is ‘disgusting by excess of flattery; excessive’.  If the chap really did think that he had received an apology that was disgusting by its excess of flattery, I don’t think that he would have sounded quite so appreciative.  I think he might even have sounded a little crestfallen.