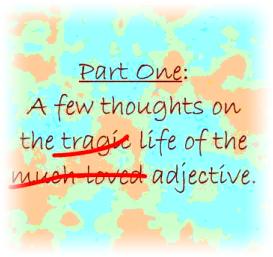 Although I haven’t heard it for a year or two, there used to be a common saying among sub-editors: If it’s not true, you shouldn’t say it; and if it is true, you probably don’t need to say it.

More often than not, this advice was prompted by the careless use of adjectives.

A child’s valiant (or heroic) battle with illness.  A mother’s desperate search for the perfect Christmas gift.  The tragic death of a much-loved pet.

For a while there, I thought that the sub-editors’ message was getting through.  But over the past few months I have noticed a return to the bad old days and bad old ways.

It seems that every entertainment event, no matter how obscure, is eagerly anticipated.  (And never mind that my dictionary lists the ‘expect’ sense of anticipate as disputed.)

Everywhere there are tragic consequences – even though, on closer reading, the consequences seldom turn out to be either ‘calamitous’ or ‘greatly distressing’.

And every performer with a light-hearted bent and a joke book is described as the hilarious Bill (or Belinda) Smith – even though they seldom manage to raise more than a slight smile from their audiences.

Adjectives – like their cousins adverbs – can be very useful.  They can add clarity and they can add style.  But scattered carelessly, they are likely to have just the opposite effect.  Whenever I read of the tragic death of a much-loved pet, I think: this is the work of a very lazy writer.