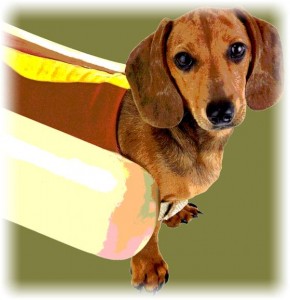 The news media has always valued attention-grabbing headlines.  Why would they not?  They grab the reader’s/viewer’s/ listener’s attention.

‘Superstar in daring rescue.’  (Even if the ‘superstar’ is someone you’ve never ever heard of.)

‘World set to end in four weeks.’  (Or is it in 4 million years?  Those Mayan prophesies are so hard to figure out.)

But in this Internet age, things seem to be going from a bit of a stretch to totally ridiculous.  And so, under the headline ‘Politician eats two dogs for lunch’, we might well read:

‘When list MP Joe Rumble made a whistle-stop appearance at Wheeler’s Whopper Dog House, he may have ordered the Double-Dog Special.  A single mother-of-three, who asked to be known only as Lynndee, says that she thought that’s what she heard him ask for.

‘Wheeler’s general manager, Hank Harkness, said that the Double-Dog Special – two hotdogs with sweet mustard pickle and a side of twice-cooked fries – was one of his restaurant’s most popular lunchtime dishes.  However, he was unable to confirm that this was what the politician had ordered.’

As a growing number of media players scrap over a diminishing pool of advertising and subscription revenue – and more and more writers are being paid on a ‘per click’ basis – the competition for shrill headlines is becoming ever more … well … competitive.  The fact that the story that follows often fizzles out within a paragraph or three seems not to matter.  That initial click’s the thing.  And the more clicks, the more chances the writer has of eating that day.

And it doesn’t stop there.  If the original non-story gets a bit of traction, it’s usually not too long before other publications/blogs/TV channels begin reporting on the report.  Often, they don’t even bother to go back to the original source.  Often they can’t afford to.  Instead, they slap up a bold headline saying ‘Politician eats dogs’, followed by a paragraph that begins: ‘Dogs are on the menu for far-right politician Joe Rumble, according to reports.’  (‘According to reports’ sort of gets them off the hook.  Hey, don’t shoot us.  We’re only the messengers.)

Oh dear.  I really do hope that someone works out a way to pay for proper journalism before we are all driven off the cliff of despair.