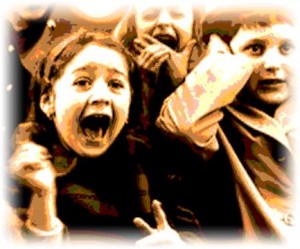 See what I did there?  I took a perfectly ordinary, unremarkable sentence and made it really exciting by adding a row of exclamation marks.

Well, maybe not really exciting.  In fact, not even a little bit exciting.  Dogs bark at posties every day.  And the addition of a row of exclamation marks doesn’t change that.

Until about 35 years ago, typewriters – the forerunners to computer keyboards, for those who weren’t around in those days – didn’t have a separate key for the exclamation mark.  If you wanted to type an exclamation mark, you had to first type a full stop (or a period, if you were in North America), carefully backspace, and then type an apostrophe above it.  Frankly, it was all a bit of a palaver.  And I’m sure that it encouraged writers to think a little more carefully about whether the exclamation mark was really necessary.  Was it really going to add anything to the communication?  Or was it just going to be a slightly distracting ornament at the end of the sentence?

Fowler’s Modern English Usage suggests that ‘excessive use of exclamation marks in expository prose is a certain indication of an unpractised writer or one who wants to add a spurious dash of sensation to something unsensational.’

Among editors of a certain age, exclamation marks are sometimes known as screamers.  I remember one editor who, whenever he received a piece of copy with exclamation marks used ill-advisedly, would return the copy to the writer with a hand-written note saying: ‘I will be happy to consider this piece when you stop screaming at me.’