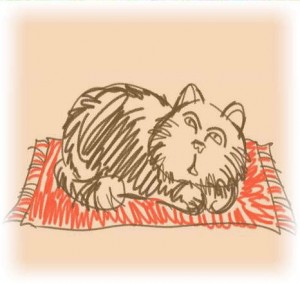 The cat sat on the mat.

Yes, ladies and gentlemen, that, in six simple words, is what happened.  The cat sat on the mat.  But that’s not what you expect to read when you pick up an ‘important report’, is it?  For your many pieces of gold, you expect rather more than six single-syllable words.

You expect substance.  You expect evidence of industry and erudition.  You expect, well, words, polysyllabic words, and lots of them.

And so … by all accounts, the small fur-covered quadrupedal mammal, described by an eye witness (whose veracity is not, in this particular instance, to be doubted) as feline (Felis catus or Felis silvestris catus, and informally, Felis domesticus), reportedly chose to adopt a semi-recumbent position on top of a rectangular-shaped portion of textile-based floor covering which, for the record, we will categorise as a mat.

There.  Is that better?

No, I didn’t think so either.  As simple, as basic, as childlike as it may seem, ‘The cat sat on the mat’ pretty much says it all.

Next time you sit down to write an important document, it might be an idea to remember that cat.