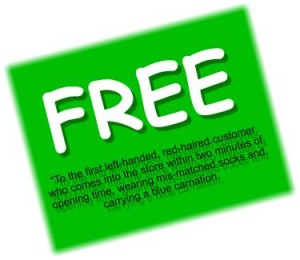 When I was a young writer, I occasionally worked with another writer who had a sign on his office wall saying: Advertising is but promise writ large.  As I recall, the observation was attributed to Samuel Johnson.

I was reminded of Dave’s sign when, several years later, I was given the task of writing up the results of some research into the likely success (or otherwise) of a proposed new investment product.

The man who had commissioned the research was not happy.  It was not the result that he had expected or wanted.

A meeting was called between the research agency and the commissioning client.  And, as the person who had largely written up the final report, I was also asked to attend.

The meeting began with the client stating, in no uncertain terms, that the researchers had clearly got it wrong.  His own gut feeling, and more than 20 years’ experience of selling investment products, told him that the proposed product would be a winner.

The head of the research agency said that he could understand the client’s disappointment, but the findings were pretty conclusive.  The methodology was proven.  The sample was robust.  And the findings simply did not support the client’s gut feeling.

‘So what did you actually tell these people?’ the client asked.

The research director explained that, after an initial exploration of the interviewees’ past and present investment experiences, they were given an outline of the proposed product and how it would work, and ….

‘Let me stop you right there,’ the client said.  ‘That’s where you went wrong.  If these guys know what the product really is and how it really works, then of course they are not going to buy it.  The secret is to sell them the dream, to sell them the promise.  The other bits can be buried in the small print.’

The client went ahead and launched the new product.  And it failed.  Spectacularly.  Although not before a few gullible souls had lost their life savings.

I guess the moral of the story is: by all means, write your promise large.  But not too large.