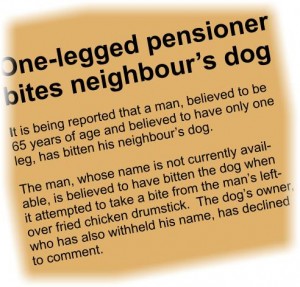 From these three bright (and feisty) women, I learned several important lessons.

First, I learned that ‘man bites dog’ is news.  But ‘dog bites man’ is not.

Second, I learned that ‘if it bleeds, it leads’.  Gore, conflict, and disasters pull in the readers.  The gorier, the more conflicted, the more disastrous the better.

Third, I learned that every positive story has a dark underside – even if it’s only in the mind of some looney conspiracy theorist.  And, if you want to hook the readers, you ignore the dark underside at your peril.  ‘Readers just do not want to read good news,’ the second of my lady friends used to say.

Each of these lessons was learned more than 30 years ago – long, long before the advent of 24/7 news.  Since then, everything has been multiplied by ten.  Or maybe by 100.

Personally, I would be happy to pay to read, listen to, or watch advertising-free news.  But it would need to be very well researched, very well written, and very well presented.  And that would be quite a step up from most of today’s so-called news.