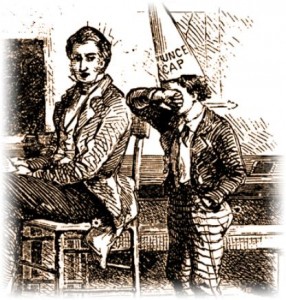 A few years ago, we had a chap on our team who was rightly acknowledged to be ‘Educated’.  That’s Educated with a capital E.

Malcolm held degrees from three of the world’s top ten universities.  He was fluent in Latin and Greek.  And he was able to converse effortlessly in French, Spanish, and Portuguese.

And yet he never quite managed to come to terms with colloquial English.  His ‘pub speak’ was always more akin to ‘high table speak’.  Not that his friends minded.  Not one bit.  But he did find it difficult when it came to verbatim reporting.

I remember an occasion on which we were asked to prepare an executive summary of a qualitative study into the likes and dislikes of people using a particular credit management service.  One of the objectives of the study was to help the service’s managers to understand what their customers really thought about their service.  Or at least what they really said to others about the service.  And, partly for this reason, the report was to include a selection of telling verbatim comments.

For a couple of days, Malcolm toiled away and, at the end of it, turned in 3,000 or so words of immaculate prose.  Unfortunately, not only had he edited the stutters and stumbles from the verbatim comments, he had recast each and every one in language that would have made the most pernickety Oxford don proud.  He was crestfallen when we suggested restoring the original comments.

Malcom died almost four years ago.  But I was reminded of him, just the other day, when I was reading a critical assessment.  The author, a chap who clearly understood the need to speak to his audience in language they understood, was doing an excellent job of avoiding passive academic constructions.  And then he blew it.

He had just reported another critic’s (slightly controversial) opinion.  And, in the very next sentence, he said: ‘I dunno about you […].’  And I stopped reading.

It is not necessary to say ‘do not know’.  ‘Don’t know’ is fine.  But ‘dunno’?  In serious writing?  That’s just asking for trouble.  I’m pleased that Malcolm didn’t have to read it.