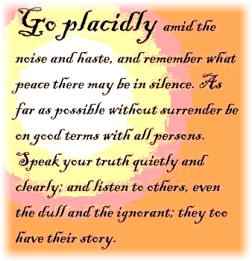 Back in my student days, it seemed that almost every one of my contemporaries owned a copy of Desiderata.  It was usually displayed in poster form – alongside the mandatory posters of Jim Morrison, Bob Dylan, and Che Guevara.

More often than not, the poem was credited to Anonymous and was described as having been found in an old church – sometimes named as Old St Paul’s – in 1692.  In fact the poem was written much later.  In 1927.  By a chap named Max Ehrmann.  But why let a few facts get in the way of a good story?

‘Speak your truth quietly and clearly; and listen to others, even the dull and the ignorant; they too have their story.’

‘Avoid loud and aggressive persons, they are vexations to the spirit.’

Trust me: if you have something worth saying, you may speak your truth quietly and clearly and I will be only too happy to listen.  But if you persist in shouting, I will simply attend to more measured voices.