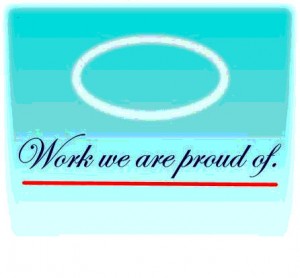 One of my vivid memories of life in the First Form was a pin board that displayed ‘Work we are proud of.’

As I recall, it was covered with rather indifferent prose written by people who, nevertheless, had neat (and prescribed) handwriting.  My own handwriting was somewhat unconventional – it still is – and so my own attempts at English Composition failed at the first hurdle – at least in the eyes of ‘the Duchess of Room One’.

After three or four weeks of failing to make the cut, I raised my hand at the beginning of the class.

‘Are you entirely happy with that heading?’ I asked.

The Duchess frowned and, for what seemed like a very long time, peered at the questioned caption.  Eventually she nodded and said: ‘Yes, I see what you mean.’  And while she wrote a new caption – in her own immaculate and prescribed handwriting – she asked: ‘And what is wrong with the current caption?’

‘A sentence is something we should never end a sentence with,’ I said.  (I was a smart arse even in those far off days.)

Of course, it was not correct then.  And it is not correct now.  If you want to end a sentence with a preposition, go ahead.  Be my guest.  Ninety-something percent of your readers won’t even notice.  But some will.  And therein lies the problem.

As with most grammar ‘rules’, the prohibition against ending a sentence with a preposition comes about because Dryden and several of his successors persuaded their publishers to publish lists of their personal preferences.  That said, even today there are some readers who are distracted by prepositions at the end of sentences.  It causes them to stumble.  It causes them to think about the construction rather than the message.

If you know that some in your audience are likely to be pedantic fuddy-duddies, perhaps you should rearrange your sentence.  Otherwise, a preposition is a perfectly good word to end a sentence with.  (Sorry, Your Grace.)