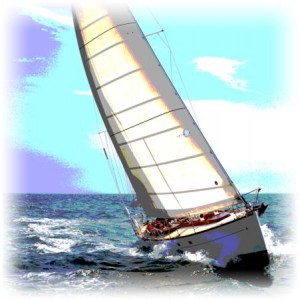 Like many sailors, I learned to sail in a small one-sailed dinghy.  I say that ‘I learned to sail’ rather than ‘I was taught to sail’ because the chap who I thought was going to teach me to sail simply sat me in the boat and said: ‘That’s the tiller.  That’s the mainsheet.  Don’t worry; you’ll soon work it out.’  And then he pushed me out into the estuary.

It turned out that he was right.  I did soon work it out.  Happily, I survived that first voyage without even getting too wet.  And, over the next few years, I graduated to bigger and bigger boats and made longer and longer voyages.

Perhaps because I was comparatively light and reasonably nimble, I spent my first couple of years on bigger boats as the forward hand – changing headsails, rigging spinnakers, and then packing them into their turtles for their next (hopefully error-free) hoist.

Then somehow (I don’t remember quite how) I developed a bit of a reputation as a headsail trimmer.  It was probably at this point that I decided that I should get a better understanding of the physics of sailing; which meant that I needed to understand something about hydrodynamics and aerodynamics and meteorology.

A lot of what I learned confirmed what every ‘old salt’ already knew.  But some of it totally contradicted what every old salt already knew.  My new-found knowledge certainly led to some interesting conversations with some of the ‘Captain Bligh’ skippers with whom I sailed.

All of this happened in the days before on-board computers and other high-tech aids.  The only on-board computer I had was the one between my ears.  But, most of the time, it worked pretty well.  I remember one particularly black night on which we reached a rock in the middle of nowhere – which was also the second mark on a 250 nautical mile ocean race course – within a minute of my prediction.  Even our Captain Bligh skipper was impressed!

And then one summer, I, along with three then-friends, set off on a reasonably ambitious cruise.  Somewhere not too far from our point of departure, it became apparent that two of my companions had the idea that I was the skipper for hire.  I was there to take them on a pleasure cruise for two.  My other companion, they seemed to have decided, was there to ply them with cold drinks and tasty snacks.

To be honest, I wasn’t too put out.  For the next three or four days, I sailed the boat pretty much single-handedly.  And then, on the fourth or fifth day, we arrived – at about five in the afternoon – outside the narrow entrance to the harbour at which we were intending to anchor for the night.  The entrance was a bit like the neck of a bottle: long, narrow, and with high rocky cliffs on either side.

My passenger-companions showed no sign of participating in the actual sailing, so I headed the boat into the wind and dropped the genoa.  (For those of you who don’t know, the genoa is the big sail at the front.)  And then, while my passenger-companions called for more cold lager, I turned the boat towards the entrance and tacked it, single-handedly, like a 45-foot dinghy, through the drainpipe entrance, making use of every last scrap of breeze bouncing off the cliffs.

Once we were safely inside the heads, with the anchor down, one of my passenger-companions turned to me and said: ‘Damn.  That was impressive.  How did you know what to do?  And when to do it?  You really must explain it to me.’